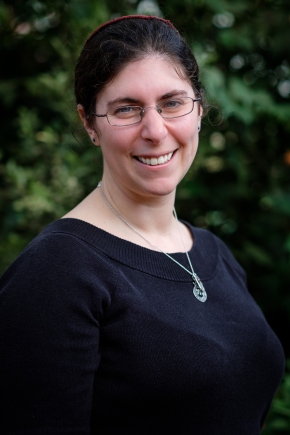 Cantor Vera Broekhuysen is the spiritual leader of Temple Emanu-El of Haverhill, MA, where she has served as Cantor since June of 2016. She was ordained by Hebrew College in June of 2016, when she also earned her Masters Degree in Jewish Education.

As an educator, Cantor Broekhuysen brings guitar and drum into the classroom to infuse Hebrew language learning with music. Cantor Broekhuysen is also passionate about the beauty and vocal connectivity of early music and folksong and brings those interests to her cantorial work. Involved from an early age with Village Harmony, a teen world folksinging group, she founded and directed Akhalkhmebi (“New Voices”), while earning her Bachelor of Music History and Theory at the University of Toronto (graduated 2007). Cantor Broekhuysen performed with Studio Sixteen, an early music vocal ensemble, in Toronto. In the summer of 2006, she traveled to the Caucasus Republic of Georgia to do an independent study on women’s voices in Georgian folk music.

Cantor Broekhuysen deeply values opportunities to pursue both spiritual enrichment and social justice in interfaith environments. She is a member of the Greater Haverhill Clergy Association, a founding member of the Merrimack Valley Sanctuary Network, and a T’ruah chaveirah (fellow). Cantor Vera Broekhuysen is a 2019-2020 Global Justice Fellow with the American Jewish World Service, studying and traveling and advocating with a cohort of 13 other American Jewish spiritual leaders. In November of 2018, Cantor Broekhuysen was honoured at the Merrimack Valley Project’s annual MICAH (Ministry In Community Action Honoree) Dinner, for her work in immigration justice in the Merrimack Valley of Massachusetts. While in cantorial school, Cantor Broekhuysen led an interfaith, cross-campus singing group (through the Center for Inter-Religious & Communal Leadership Education at both Hebrew College and Andover-Newton Theological Seminary) and with CIRCLE Fellow Maryam Sharrieff, co-created a series of events and workshops exploring the female voice in relationship to text and spiritual authority within Judaism and Islam.

Cantor Broekhuysen is a member and former secretary of the New England Board of Cantors (NEBC). In March of 2018, she helped organize, and performed in, “From Out of the Storm: Cantors Respond to Devastation,” a successful benefit concert on behalf of the Jewish communities in Puerto Rico and the Virgin Islands who were impacted by Hurricanes Maria and Jose. This event was cosponsored by NEBC and Temple Beth Zion of Brookline, MA. Cantor Broekhuysen was a proud member of the Zamir Chorale of Boston from 2012-2018; she also performs with Kol Arev, Hebrew College’s vocal ensemble, in their Klezmer Kabbalat Shabbat service.

Cantor Broekhuysen lives in North Andover, Massachusetts, with her husband and two sons.

I knew that I wanted to be a singer since I was a little girl, when my favourite song was the Queen of the Night’s aria from Mozart’s The Magic Flute. Music-making engages my brain, my heart, and my body. It’s an experience that’s decidedly not “out of this world”; it’s fueled by my breath, by my gut, and responds to my setting. It wakes me up and demands me in the present moment.

We humans transform when we sing. It engages and invests us in whatever we’re doing. We’re also able to communicate in new ways. Conversations happen in music-making, quite apart from any lyrics. Hearing and responding to another person singing or playing requires particularly attuned attention. And sometimes in a flash, without premeditation, moments of wonder arise. I believe that connection with G-d occurs in this same movement between attention, preparation, and openness to “radical amazement.”  (Rabbi Abraham Joshua Heschel)

I delight in the play and interaction and intention of participatory music-making, and my hope and desire as a cantor is to use my voice to invite those whom I serve to this dance. I want to pique their interest in new melodies and in Jewish texts. I want to challenge them in the ways they express themselves to each other and to G-d. I want them to feel that they are owners of, and innovators in, our Jewish tradition. Cantors have a precious, perhaps a unique, opportunity to achieve these goals by simply and mindfully doing what we love. I am blessed and humbled to have my feet set on this path.