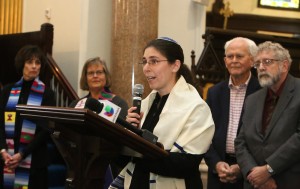 In the Torah, the Five Books of Moses, G-d commands us 36 times that “you shall not oppress the stranger, for you were strangers in the land of Egypt.” Too often, Jews have been seen as “the other” even in lands where they have lived for centuries, with painful and sometimes tragic consequences. To be Jewish is to share – consciously or not – in immigrant identity.

I am the daughter and granddaughter of American immigrants. My father’s father and uncle, both engineers and inventors, came to the USA from Holland after World War I. They found their own places in a growing economy that welcomed new blood and innovation. My grandmother and seven-year-old mother, fleeing nothing worse than my grandparents’ incompatible marriage, came to Boston from Calcutta in 1951 on a tourist visa. They were lucky; my grandmother’s brother-in-law was a judge with good connections. In June of 1955, the U.S. Congress passed a private law granting Mom and Gram citizenship. I stand here today because concerned individuals advocated for my mother and my grandmother and pushed through legislation to let them remain on American soil. America gave my family work, and it gave my family hope.

I am appalled by the criminalization of hope that we see in current American deportation practices. In the face of these events, I am proud to join with my colleagues in the strength of our faith as we listen to G-d’s call, as it is written in the book of Exodus (25:8) “V’asu li mikdash, v’shakhanti b’tokham.” Let the people make for me a Sanctuary, G-d says to Moses, that I may dwell among them. May we all own the courage to face the plight of our undocumented neighbors and say, not “There BUT for the grace of G-d go I,” but rather, “There, WITH the grace of G-d, we will stand.”